“Look for the helpers. You will always find people who are helping.”

On Monday, my parents were riding their red tandem on the Burke Gilman Trail when their typical day took a sudden turn. The biker in front of them suddenly stopped, and my dad safely passed to the left. Some glass sparkled in the sun, and my dad quickly understood why the biker halted. But before the long tandem’s frame finished slithering by the stopped biker, the biker jutted back onto the trail, clipping my mom’s right handlebars and back wheel and sending them crashing to the hard ground.

They were thankfully next to the University of Washington and within minutes an ambulance aided my mom into its box, temporarily patched up my dad’s elbow and delivered my mom into the ER.

Meanwhile, my dad biked the tandem all the way home (about ten miles with the last mile straight uphill). When he arrived home, he realized his helmet cracked in three places and the blood from his elbow (which required stitches!) was endlessly dripping. Uh, talk about adrenaline, tenacity and determination.

And that’s where the helpers come in.

I live 200 miles away. My brother lives 2,500 miles away. We couldn’t be there immediately, but within 24 hours I became overwhelmed with gratitude for the helpers in this world …

*For those on the trail who called 9-1-1, set their bike in the grass, and stayed with my parents until the ambulance arrived.

*For my parent’s friend, Ken, who drove my dad to the hospital to meet up with my mom and sit with my parents as they endured multiple x-rays, CT scans and stitches. When they were discharged in the wee morning hours, he drove them safely home.

*For my friend offering to drive me to Seattle if I needed a ride.

*For warm meals dropped off with smiles and prayers.

*Since my parents retired a few weeks ago but are still in the midst of training and transitioning the office, another friend volunteered to be the new chiropractor’s receptionist for the day, which he gladly accepted.

*For texts from my Seattle friends and cousin to find out if there was anything they could do to help.

When Gracie and I drove up the next day, I became overwhelmed with gratitude. I’m convinced there can never be too many helpers in this world. Open eyes. Willing hearts. Feet to step in. May we all be helpers wherever and whenever possible.

And thank goodness for helmets! 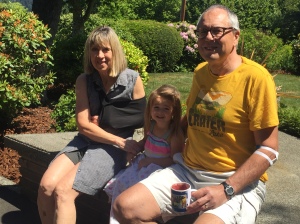 View all posts by Anika Ortiz

2 thoughts on “Look for the Helpers”